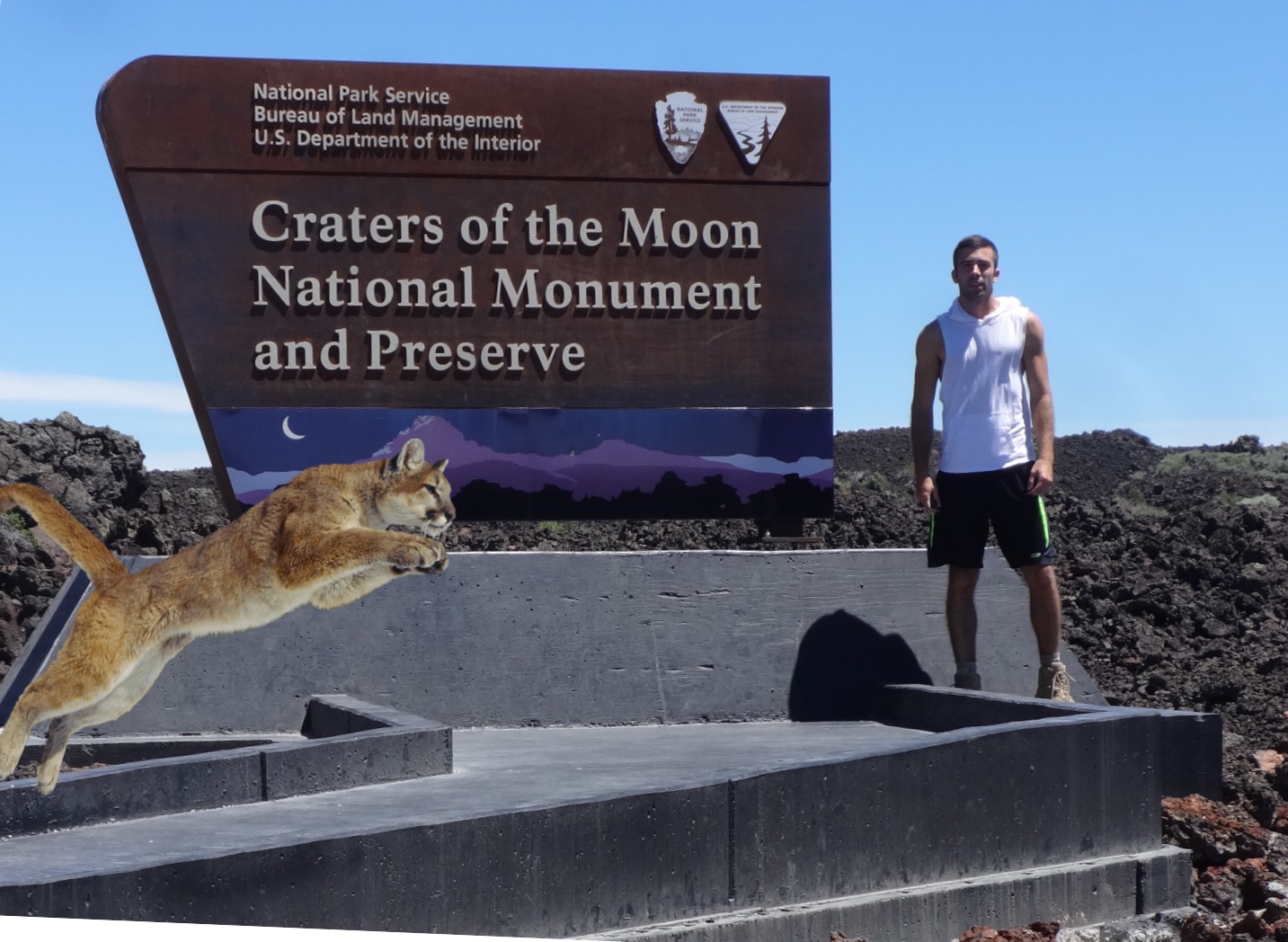 Perhaps I was wrong about mountain lions. Maybe they would be more of a problem after all. That growl was unlike anything I had ever heard before. Suddenly I was flooded with goosebumps. The park ranger at the visitor center was not kidding.

I was now at Craters of the Moon National Monument and Preserve in southern Idaho. At the visitor center a blond female park ranger, with abundant curls that towered upon her head like she was straight out of the 80s, made a child declare the Oath of Service as a Junior Ranger. She spoke with her “r”s quite accentuated. “As a Junior Ranger I promise to teach others about what I learned today, explore other parks…”

Then it was my turn. I wanted to secure a wilderness permit to camp out in the volcanic black sand wilderness of the monument. The ranger was kind and helpful, and she highlighted a place on the map I should camp at: Echo Crater. She proceeded to indicate the route and gave me a permit to hang on my backpack. She said the trail wasn’t always visible, but pointed out some landmarks to guide me on my way. I asked her to repeat them. After all, I didn’t want to end up lost like at White Sands National Monument. I asked her if there was any wildlife I needed to be aware of. “Squirrels,” she said. “We have squirrels.”  Okay, I thought, you don’t need to advise me about squirrels. Then, just when I was about to move on, she informed me: “Now, there has been a mountain lion spotted a few times recently out by Echo Crater.”

“Oh?” Perhaps this is more important information than that of the squirrels

“Just be cautious, and you should be fine.”

Do I ask her more about this? I thought. She already issued me a wilderness permit and asked me if I was prepared for safety in the backcountry. I didn’t want her to lose confidence in me or doubt her decision in issuing me a permit. So, “Thank you,” I replied. Plus I was running short on time. I wanted to set up camp before the sunset. It was already evening. The day flew past me as I had driven in from Yellowstone and even experienced my first buffalo jam.

So I quickly got myself together. I was able to pack quite lightly and use my new serious backpacking backpack I had gotten at a Bass Pro Shops at the beginning of the summer. I had my Kelty tent, long underwear, sleeping bag, Vitamin Water, bandana, compact pillow, a Clif Bars, a protein fortified crispy rice bar, electrolyte gummies, miniature toothbrush, flashlight, water, and a book. I was ready, or at least close enough, so I hit the trail. The terrain was quite unique in that it primarily consisted of black and dark brown sand and rocks, which was the lava field remains of a series of underwater volcanoes that defined the area and gave it all its buttes, cones, and craters. As I made my way along volcanic remains there was the occasional shrubbery or pines that adorned the landscape, but it was mostly barren and dry like the surface of the moon. There wasn’t much of a trail other than footprints in the black sand. At one point I passed by some lava flow caves. I’d read about these. These hallowed out tubular caves underground were where lava once flowed. The tops of these caves pressed upon the surface and gave the terrain a rounded, and, at some locations, a cracked surface. I’d read somewhere in the monument you can explore these caves.

Then suddenly I heard an abrupt growl or roar, not any ordinary sound, but a heinous malicious sound, like something had just been attacked violently! It seemed to come from the ground, from the lava tube caves just beside me. I was flooded with goosebumps, a chill went down my spine, and I ran down the trail, but with my oversized backpack, running was not sustainable. The sun was setting beneath the horizon and any remaining shrubbery had taken on a golden hue from the sun, bidding farewell to the day, and here I was alone and vulnerable. Well not exactly alone- with a mountain lion in my midst!

I became extrordinarily vigilant, every few seconds looking behind me, hoping I didn’t find a lion stalking me. My actions express my concern, but at the same time, how cool, I thought. I just heard a mountain lion attack something. It seemed almost unreal. I couldn’t wait to return back to the visitor center in the morning and tell the rangers about my experience.

Eventually the trail of footprints dissipated into nothing. I had been counting buttes, for the ranger told me that after a number of buttes I’d find Echo Crater. I wasn’t sure what the visual difference of butte and crater was. At the time I thought it was pronounced “butts.” I was just counting butts at sunset with a mountain lion. Wait, how am I supposed to know if I’ve been counting “butts” or craters? What about cones? I was uncertain of where I was supposed to be. At one point I backtracked a little bit to reassess the lay of the land. Then I had to assess my situation. I could keep going, or I could call it a night. After all, the daylight would soon be gone. I think it’s probably better to get set up and in my tent, regardless of whether I am in the right location or not, because there is probably a mountain lion on my tail. I concluded that I would consider this big mound of a volcanic feature Echo Butte, whether it really was or not.

I also had another burning question: Am I to camp in the crater or beside the crater? The ranger just said “at the crater.” “At” is a vague term in such a circumstance. I thought I’d try and camp in the crater, so I made my way up the side of the hill leading into the crater. Then it dawned on me: Do I really want to be trapped inside a crater with a mountain lion? I remembered when I was in Death Valley years prior. I ventured down in a crater, and then had a bit of trouble getting back out, and I recalled a coyote down in that crater. Perhaps the mountain lion lives in the crater and I’ll get trapped in there with him. No thank you. I felt better camping out on the lava flow. Aside the mound of the crater was a flat barren field of black rock and sand. While I was setting up my tent there, I tried not to bend or kneel down much, after all, that would put me in such a vulnerable position for the mountain lion to pounce and break my neck. Then I threw my backpack in my tent and hopped in. As I was unpacking my bag and getting situated, some rocks tumbled down from the crater mound and I heard steps. It’s found me! I shrieked in my soul and my heart jumped. What to do? Then I saw out the window of my tent, it was no mountain lion. It was a deer. It walked right past my tent. Phew! That was a close one! I thought.

As daylight left, I had my snacks, brushed my teeth, and pulled out the book I had purchased in the visitor center. It was a middle school mystery reader, one in a series, each one taking place in a National Park. This was the Yellowstone installment called “Wolf Stalker.” More appropriate for the occasion would have been “Lion Stalker.”  As I began to read the book, I found no allusion to imminent peril, and it captivated my attention. I had calmed down. I felt fine, at ease, and quite at peace. I found the same great lonely freedom I found when I went backpacking in the wilderness area of the Petrified Forest. I slept quite well, despite brushing waking consciousness a few times from the cold.

In the morning, as I woke with the sun, I began to thaw out. I thought I’d explore more of the area this morning and have a look inside the crater. I tore down my tent and packed my bag. I felt quite alone, but I loved it. As Theodore Roosevelt once said, “The further one gets into the wilderness the greater is the attraction of it’s lonely freedom.” I was removed from the troubles of the world, and my featured accomplishment was surviving the night without being eaten by a mountain lion. The danger of a lion now seemed so distant.

But then…what was that sound? It was something more than the chirping of birds. Voices? People? Around the bend of the crater mound came a couple of beings. I’d learn they were a park biologist, the older man, and his apprentice, a college student doing an internship. I thought I would ask them more specifics on where I was and what I could see. Pleasantly, they introduced themselves and told me they were out here studying birds, particularly taking a bird inventory. They set a timer for five minutes and then counted bird calls they heard in specific areas. It told them what birds were in the area and how healthy the population was. They had finished their work for the morning and were doing just a bit of sightseeing, the older man showing his intern around.

“Come follow me,” the biologist invited. “I’ll show you how to get into the crater. He guided us around to the other side of the mound where vegetation was more abundant. We did quite a bit of bushwhacking. I engaged in conversation with both of them about my trip, about the park, about their lives and where they were from. I felt so fortunate to have my own private biologist to guide and interpret the park for me. Once we reached the edge of the crater we had climbed quite high. I was struck with an awesome view into the crater. It was like its own little biome, its own island. Trees and shrubs grew down in it. How cool it would have been to camp down in that sheltered world, but then again who knows how safe. I looked out upon the expanse of the preserve here and saw snow capped mountains in the distance. The biologist guided us down into the crater. I marveled at the rocks, and the trees, and the crater walls. I saw where other people had camped before, and my question of where I was intended to camp had thus been answered.

When we trekked our way out of the crater we parted ways, and then rejoined by happenstance again. At one point I veered to check out a cave. I poked my head in cautiously. Because of what I heard the evening before, that was quite enough. I thought about telling the biologist about what I heard and my experience the night before, but when I contemplated sharing it, I felt like I sounded crazy. I thought then about telling the ranger back in the visitor center, but when I got there, it was still very early and it was closed. I left my wilderness permit at the door. I didn’t share my experience with anyone at the park, but I treasured it as one of my greatest souvenir experiences of the summer. With that in my pocket, onward I’d proceed to Bruneau Sand Dunes State Park.

Read the previous entry “Why I Cried at Roosevelt Arch- What Theodore Roosevelt and the National Parks Mean to Me” here: Bears and Buffalos – on the verge (joshthehodge.com)

Check out my book Canyonlands: my adventures in the national parks and the beautiful wild here: https://www.amazon.com/Canyonlands-adventures-National-Parks-beautiful/dp/1711397873