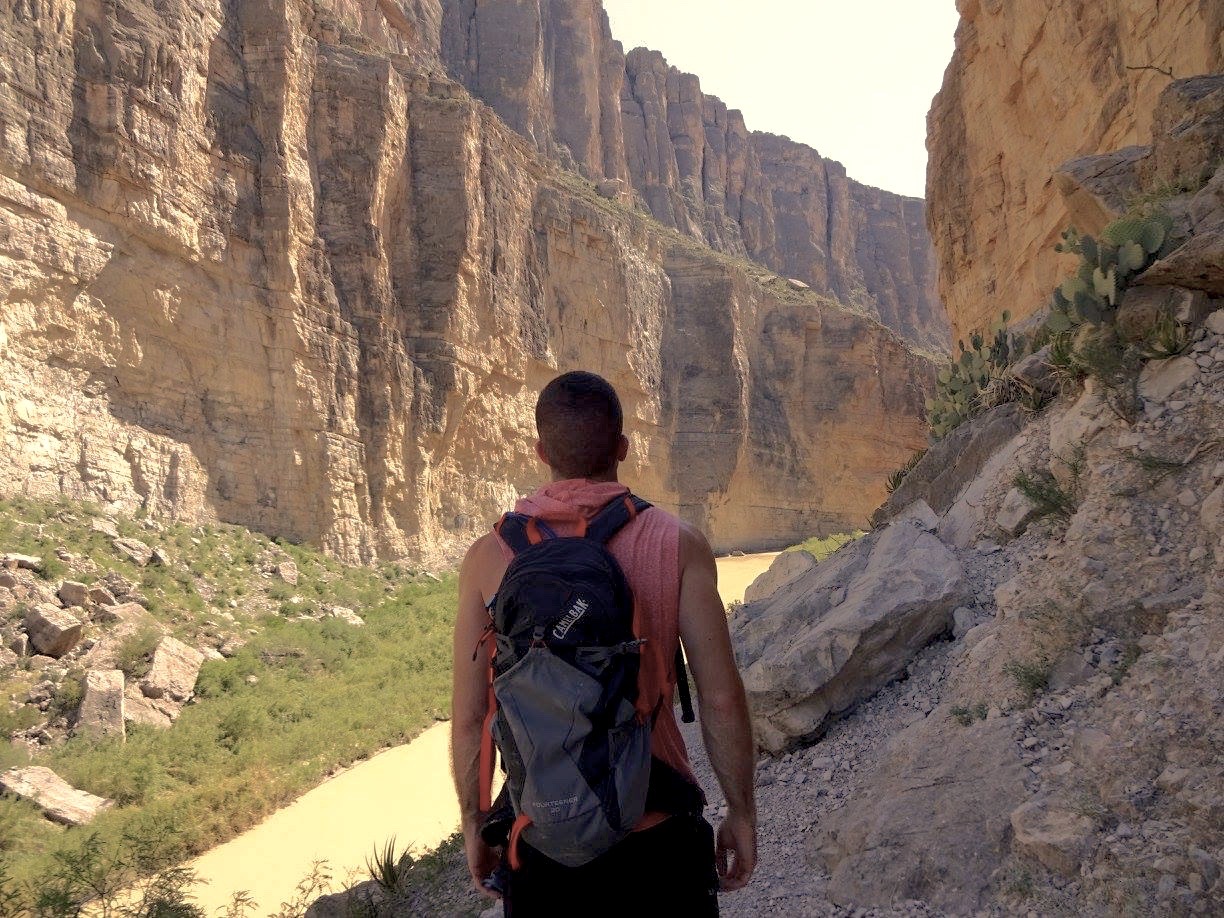 “Is there a trail over there?” I asked.

“No, but you can bushwhack,” the man replied. I was looking at Terlingua Creek in Big Bend National Park as it poured into the Rio Grande and the water flowed into Santa Elena Canyon. I had parked at the trailhead. There was supposed to be a trail into Santa Elena Canyon. It didn’t look promising, but if this man and his three small children could do it, I could too. How did they do it, really? Did he carry all his children on his shoulders? Because the Terlingua Creek was not by any means a dainty waterflow easy to cross. It appeared as a rushing river. As I put my feet in to start my “creek” crossing, the water rushed around me, and as I carefully stepped forward the water got increasingly deep. Water flowed waist up, and I nearly lost my footing. I was unsure that this was a good idea, but after crossing the deepest part, with a lunge, I met ground on the other side. Well soft silky terrain that oozed between my toes and sucked my feet down into it.

Trudging my was through a forest of underbrush, ducking my head under curving branches and pulling others aside with my handle, I was following the footsteps of prior travelers trying to find my way to the actual established trail. I knew the level of water was to blame for the covering of the actual starting point of the trail. While I was exploring my way through this jungle-like environment I got caught up in the novelty of the scenery and moment and so lost track of footprints in the mud. I tried to backtrack, but I couldn’t make sense of the footprints anymore especially combined with mine. I was barefoot, shirtless, ankle deep in mud, and bushwhacking my way through riverside growth. I felt perhaps the most primitive and truly explorative I have ever felt before. 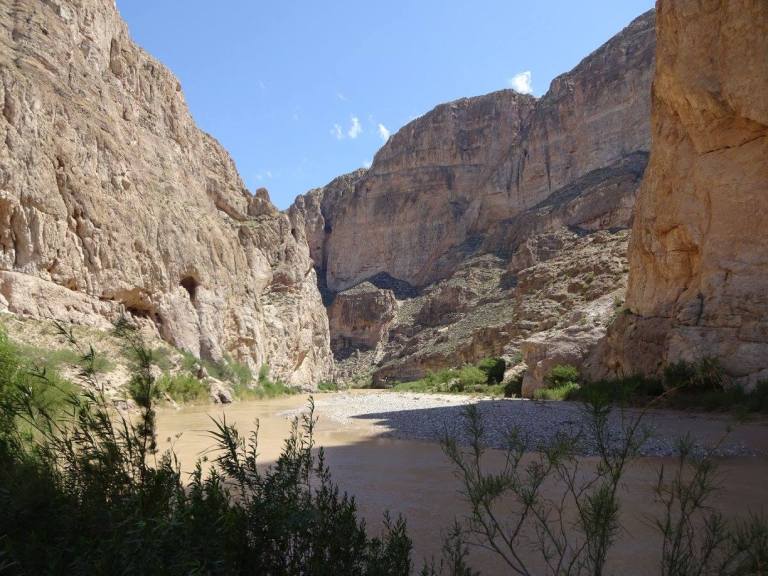 Eventually, after a brief moment of uncertainty, I arrived in Santa Elena Canyon where giant cliffs forming the canyon walls measure 1,500 feet. Here one cliffside is Mexico and the other is the United States of America, and the Rio Grande flows in a murky pale brown in between. On the U.S. side, about halfway down the cliff faces, rock erodes leaving piles and a bar alongside the river where trees and other plant life grow. This is where the established trail is found.

As I walked through the canyon, I was met with a sense of wonder at the immense bold rock walls and the knowledge that the two countries come together at this exact location. Here I was far down below in the eroded expanse created by the river. Up above on the plateaus is where the two countries exist with all their problems and all their dealings. Here in Elena Canyon I felt like I was in some secret fortress or a hidden world, protected, encased by the walls of the canyon. I walked slowly, my eyes focusing at the majestic walls and back down to the quiet river.

I took the trail as it flowed up and down alongside the canyon wall. At one point I came across a large fish that the river must have left ashore, which had begun to dry out and be reclaimed by the earth. I took the trail until I could no longer, until it sort of disappeared and the rocks became more jagged and gave way to the river. Everyone that comes to Big Bend National Park should not miss out on this short hike. The views are among the most astounding in the park. The only word of caution would be crossing the creek.

The visit to Santa Elena Canyon was near the end of my day’s adventure. This morning I ventured out in my car to travel the whole expanse of the park and get a sampling of all it has to offer. I first stopped at the Fossil Discovery Exhibit. I learned all about the terrain and dinosaurs that used to live in this shallow sea. I even got my picture with a cask of the Deinosuchus skull. I then proceeded southward in the park on my way to the southeast corner to visit the Hot Springs. I’d read about this and was very interested I had never been in a hot spring. I stopped at the Panther Junction Visitor Center to inquire about the hot springs. New to hot springs, I just didn’t know if there were any safety precautions I should take. The park ranger said “I can tell you this:  It’s about 100 degrees outside right now, and the water is also about 100 degrees. You can decide if you want to go in or not.”

I drove the 20 miles to Hot Springs.

The final few miles were on a remote dirt road. When I arrived in the small parking area a sign read “Vehicle Theft is common in this area.” That was not comforting. I got out of my car and very cautiously observed my surroundings, alert at all moments. I was near a part of the Rio Grande where the water was shallow and the girth of the river was small, where crossings from Mexico on foot were very possible and so frequent.

I observed the remnants of the old post office and bath house that used to stand on site. On the half mile hike to the hot spring, I got hit with an overwhelming sense of insecurity and uneasiness. I felt like I was being watched. Something was not right. Then, next to the trail, I came upon a grouping of small Mexican animal figurines “alebrijes” standing on the ground by a plastic jar with a slit cut in the top for money collection. Someone had crossed the river to place this and may be hiding somewhere at this moment, keeping an eye on the money jar. In retrospect, this seems silly, but this was the final bad omen. These figurines probably belonged to someone impoverished from across the border who was rather innocently trying to make some money. However a criminal is a criminal. This person broke laws by crossing into the U.S. this way and selling items in a National Park. Considering this, along with the sign warning of vehicle theft, I could almost hear the little figures saying “we are watching you,” and in the moment it scared me a lot. I came upon them but it seemed like they found me, and suddenly jumped out, unexpectedly. They seem like menaces of a Goosebumps novel. It sounds ridiculous, but such a negative energy surrounded those little figurines that I started running back to my car. I don’t know exactly what danger was there, but I could sense it. I knew it wasn’t worth it to see the hot springs.

Back on the main road I took a short stop at the Rio Grande Village which was closed for the summer, except for its store. There were very few people out and about the park but here a group of about a dozen teenagers and few adults formed a line in front of the checkout counter. They were all together. I bought some Check Mix and a Vitamin Water as well as a pair of fancy socks with an image of a bear and the words “Big Bend” sewn into them. I then proceeded to the Boquillas Canyon Overlook. I parked my car and walked the short path to the river overlook. There, on the banks of Rio Grande on the U.S. side, a short Mexican man wearing a sombrero was singing Cielito Lindo “Ay, ay, ay, ay Canta y no llores.”

There were a few other tourists at this spot as well. One man asked this singer questions about where he was from This man shared. “I’ve been crossing the river for about 20 years to sing songs, any requests.” He too had a money jar for tips.

When I crossed the expanse of the park and was nearing the West end to visit Santa Elena Canyon I stopped at Mule Ears Viewpoint where one can see the two giant rock formations peaking up like ears. I also stopped alongside the road to view the enormous ocotillo plants, a native to the Sonoran and Chihuahuan deserts with their skinny stems creeping well over twelve feet tall.

My final stop before venturing into the canyon was at the Dorgan House Trail which leads to the remnants of an old homestead called Coyote Ranch. There were interpretive signs telling a brief history of the place. Settlers had to give up their homesteads when the government seized control of the land. The remnants of the buildings at Coyote Ranch are rusticly beautiful. There were clay bricks falling down from once fully constructed walls and door frames and window beams constructed of what looked to be driftwood. The homestead was up on a bit of the hill. I paused and looked out at Santa Elena Canyon in the distance and the expanse of savannah and rock formations in the distance. The place was so extremely quiet and remote. It fascinated my imagination to entertain that this was once home for people and they somehow raised animals and grew crops on this near barren land.

When my day was nearing its end, I headed back to the Chisos Basin in the center of the park where I was staying in the campground. I went to the lodge and bought a book titled Beneath the Window: Early Ranch Life in Big Bend National Park Before it was a National Park. The author Patricia Wilson Clothier recounts here childhood living in the region and the difficulties of trying to farm a land so harsh and uninviting. She mentioned how during her childhood in Big Bend, other people were rare, and those who did live nearby in the Big Bend region were a journey away. When they weren’t at their ranch, like others they would always leave doors unlocked and open for weary travelers passing by. It was expected that people passing through may need a place to stay or food to eat, so the door was always open. I found that information very insightful. Maybe this goes to explain the very apparent friendliness of West Texans. A culture was established in the past of excitement for people and visitors, because “new” people were a sure rarity in this rural land. I thought to myself, I don’t need to be in West Texas to be a rarity. You’ll find me a rarity wherever I am, for better or for worse.

I ate dinner at the Chisos Basin Lodge restaurant. I enjoyed some pork tacos with kale wand a great views of the rock pinnacles before me out the window. After dinner I bought some yogurt from the general store I fainted in the evening before, and I read my new book on the back porch of the lodge to another amazing West Texan Sunset.

The following day I would head north to the border of New Mexico and Texas to visit Gualalupe Mountains and Carlsbad Caverns National Parks.

Check out my new book “Canyonlands: My Adventures in the National Parks and the Beautiful Wild,” here: 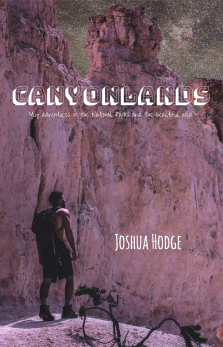 Occasionally, some of your visitors may see an advertisement here,
as well as a Privacy & Cookies banner at the bottom of the page.
You can hide ads completely by upgrading to one of our paid plans.

Treasures of the ChihuahuanIn “adveture”

3 Rattlesnakes and a FrenchmanIn “adveture”

← It’s Christmas but Where is Peace on Earth?

One thought on “On the Rio Grande: a world between the U.S. and Mexico”