Approaching Great Basin National Park, I was driving through some serious desert in which nothing would grow. To me it appeared to be a giant salt flat. The ground was white and contrasted the blue and purple mountains in the distance. I pulled over to the side of the road to take in the scenery. I stepped out of my car and the heat was extreme. 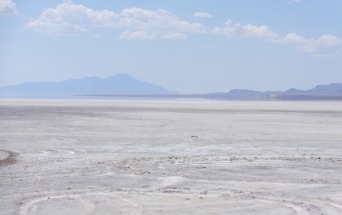 There was no way for me to gage the distance of the expanse before me, for there were no objects to give perspective. There was nothing but a grand mirage of water. It appeared that the desert housed a great lake, but the image disappeared at certain angles and the illusion waved in the heat. I knew it was desert trickery.

I’d seen pictures of Great Basin National Park. How could its beautiful streams, glacier ponds, and pine forests appear in the midst of this? I drove further into nowhere. No other car, business nor home had been spotted in a long time. The desert eventually permitted low lying shrubbery, but it was still a very typical Nevada desert nonetheless. The scenery would have to make a drastic change if I was going to arrive at the park I’d seen in the pictures.

And it did. The mountains in the distance grew taller as I approached them. I knew the park had to be tucked up in the mountains. After zipping across the flat desert road, which was so inviting for high speeds, I came to a “T” in the road. An arrow pointed in both directions and a large stop sign read “WHOA!” An arrow pointed left to Baker, and another arrow also pointed left to “Great Basin National Park.” There was no indication of what a right turn would yield.

I soon arrived Baker, Nevada, gateway to the National Park. The place consisted of people living in dilapidated trailers, an abandoned shack with a sign posted “Museum of the Future,” a car which looked like it had been abandoned in the 1920s, some sort of business labeled “The Happy Outlaw,” and quirky and seemingly random pieces of roadside art. There was a manakin lady’s legs sticking up from the ground, as if she had plummeted or was pulled into the Nevada desert. Another piece featured an alien in a wheelchair adorned with old electronics and parts of appliances. This is so weird, I thought. I like this. This is so Nevada.

I am an outsider to Nevada, and from my outsider perspective, here is how I see it. Rural Nevada residents embrace their weirdness. They even showcase it, and irony is their forte. Things don’t always have to make sense for them. They don’t have to have a theme or message. You just shoot for random and strange, but throw in some irony when possible, and that is pleasing, such as the abandoned shack labeled “Museum of the Future.”

This is not just an observation based on Baker. Elsewhere in Nevada I’ve seen some interesting sites. Once I stopped at a gas station, and in the men’s room, I relieved myself into a cascading urinal fountain adored with rocks and greenery, where people had thrown pennies in, as if making a wish. Also outside of Death Valley, on the Nevada side, in the abandoned city of Rhyolite I’d seen the figures of the last supper recreated as lifesize ghost statues. Nevada is just full of surprises. I mean, in Baker you don’t get a stop sign, you get a “WHOA!” sign. They just have to be different.

When I come across these rough looking trailers isolated in the desert, it’s not something I look down on or fear. I don’t think these people are hostile, or unrelatable by any means. Some may be living in poverty, and life may not be ideal, but for many, this is just how they live in Nevada. Many people have moved to Nevada and have chosen to live here in this way. It’s so far isolated from the rest of the country that sometimes these lots of land don’t have access to the full array of utilities, and there’s no one around to build a house hundreds of miles out in the desert. So, the only option is to resort to a trailer.

Another thing worth mentioning in my observations about rural Nevada is the fascination with the supernatural and extraterrestrial. The supernatural fascination, I think, is tied back to all the ghost towns they have. These ghost towns have held so much life and so many stories, and then they were suddenly abandoned after the silver rush, but stories live on, or are speculated. And so in these places that have been abandoned there are allusions of the past that are almost seeable and believable, just like the mirage of water in the desert. It’s as if the beating heart of Nevada is a ghost itself, but a ghost really wouldn’t have a beating heart, would it? That’s just a piece of Nevada irony for you.

The extraterrestrial fascination may have in part to do with the mysterious Area 51 housed in the state and the vast claims of UFO sightings in the area. But, also, when you are isolated hundreds of miles out in the desert, with not a soul to talk to, and the heat is really getting to you, I could imagine your mind could convince you of, or conjure of stories of, alien encounters.

However, when it comes to  Nevada, I love it! There’s nothing like it.

When I arrived at the park boundary, I didn’t stop at the park visitor center. My priority was to secure a campsite in the Wheeler Peak Campground. I proceeded straight up the mountain, where the landscape changed into a dry pine forest. I was able to secure a great campsite within a small patch of trees. Like Nevada itself, Great Basin National Park is full of surprises, and is an underrated gem. It would become one of my new favorite National Parks! I wouldn’t say stop here and check it out, I’d say Whoa!, have. a. look!

Read the next entry “The Greatness of Great Basin,” here: https://joshthehodge.wordpress.com/2018/03/22/the-hidden-greatness-of-great-basin/