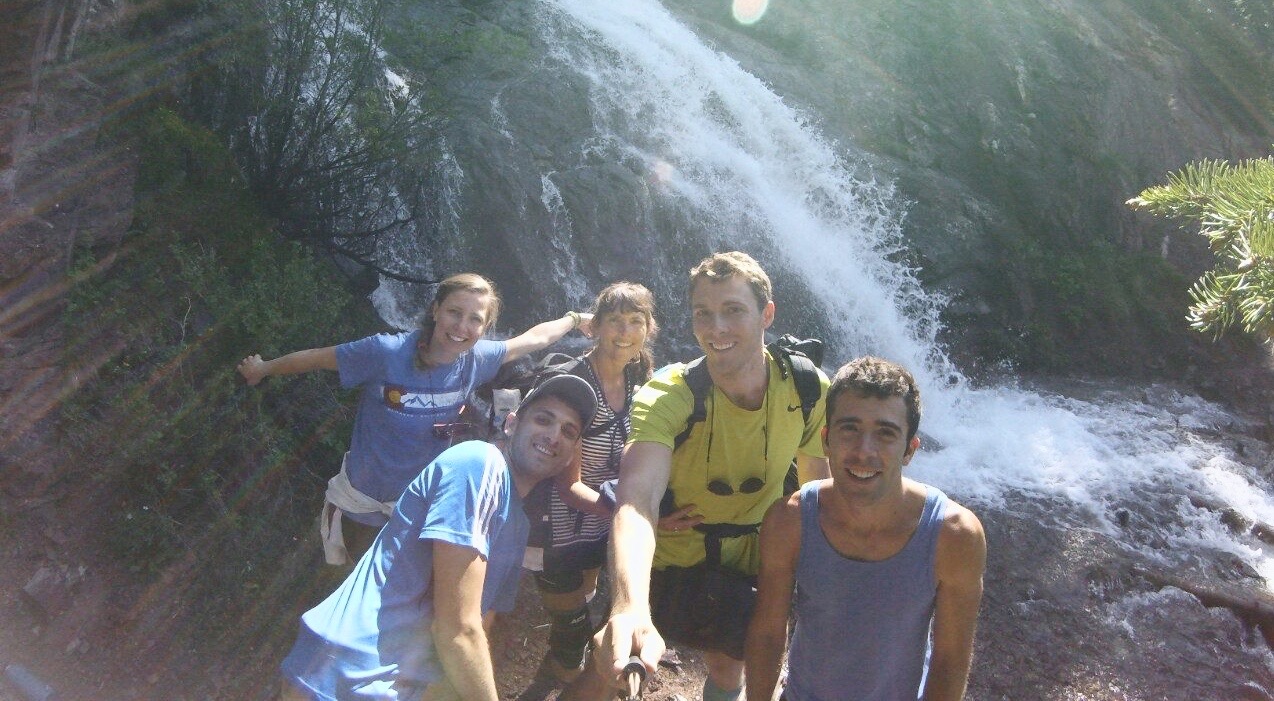 The dirt road we were traveling on was bumpy, rattling my little rental car and swinging my National Park pass hangtag side to side like a violent pendulum. It was a prime example of a washboard road, and the grooves on this road might as well have been paved.  My cousin Jonathan and I were in this car trailing Paul who was in another, leading the way with Mary and Ines.

We were on our way to the trailhead which would guide our adventure up into the San Juan Mountains where we would camp and visit the Ice Lakes. I had only a vague idea of what to expect, because I hadn’t even seen photographs of this place. I was trusting my cousin, Paul, with this adventure. After all, since he’d come all the way from Germany for a visit, and this hike was on his list of things to do, it must have been well researched.

We came to a small parking area nestled down in a valley with a rushing river and a footbridge on one side and prairie on the other. Elsewhere, dark pines stood. We were in an area managed by the National Forest Service. There were a few other cars, but the place was by no means busy. We quickly geared up, took a group photo, and were on our way.

The morning was absolutely beautiful. The sky was pure blue, the sun bright and cheerful. Vibrant colors were painted all around- the green of the pine and prairie, the orange and greys of the Colorado rock, the white of the leftover snow in the high reaches, and even the bright yellowness of Paul’s neon shirt. The sun was at such a position, and the air so clear, that every wrinkle and crack of rock was exposed, every tree top was distinguishable, and the dance of every rustling leaf was visible. The landscape was in the highest of definition, fully awake and alive.

The hike was about two miles. The whole thing was an incline, but it wasn’t terribly steep, There was a series of switchbacks along the ascent, which lessened the immediate incline. The trail by nature was not difficult, but my backpack was by no means light. I was carrying a lot of water and it weighed me down, and so it made this hike pretty strenuous. I’ve thought back to this hike in other challenging backpacking situations. I remind myself,  “If I can hike up the San Juan Mountains with that backpack, I can certainly do this.”

The hike took us on a very narrow path into a thick pine forest with lots of growth on the forest floor. At one point, near the beginning of our journey, we came to a rushing stream. We had to cross it by our own creativity. Ines took off her shoes, carefully placing her feet on stones to cross. I kept my waterproof boots on and trudged through the water. Paul leaped over. Mary and Jonathan found their own ways. 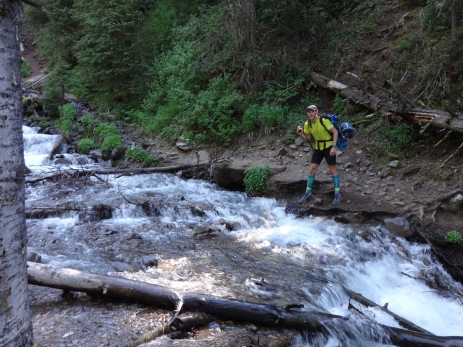 We came to a second wilder, more intense, crossing later on. Two logs had been placed across the rushing water, but with nothing to hold onto, it became a careful balancing act. We found two large thin pieces of tree limbs that Mary held onto on either side. She stuck them down into the rush of the water, like trekking poles, to help keep balance and cross over.

As we ascended the mountains, we came to a hybrid aspen and pine forest which let out into a wild grass prairie on the mountain side. It reminded me of my journey up the mountain in Manti Lasal.

About halfway up our ascent, we came to a waterfall just off to the side of the trail. It was loud and dropped very sharply. We were able to stand right next to it.  Paul had a Go-Pro camera on a stick, we took a group photo. It was also around this time that Jonathan discovered that he left a camera lens or a battery back in my car. He chose to go down to retrieve it. He ran, and it didn’t take long for him to catch back up with us, but after the extra mileage, he was tired.

We found a spot to take a short break. It was in an area of prairie where trees stepped aside to present a majestic view of the valley which curved around a bold mountain. The mountain in view had an exposed top of grey rock with streaks of snow painted down its side. All around, below, were thick congregations of pines, sharply pointing upward.

Alongside the trail, there was a rock boulder maybe fifteen feet high. Jonathan and I climbed up to the top where I was able to catch Jonathan, on camera, in a pensive pose with the mountain behind him.

After our short break, we continued on our journey, climbing higher and higher, the backpack straps digging deeper and deeper into our shoulders, and then we reached our summit! We found ourselves in the most beautiful basin. The entire floor of this basin was covered in wildflower plants. They weren’t in bloom, but they filled the air with a sweet aroma. All around were the slopes of green wild grass growing up the sides of the basin. On these slopes were streams of water cascading down from ice melt. It was so fanciful, so perfect.  Places like this aren’t known to exist outside of fantasy. On the basin floor the streams of rushing water spread in all directions among the wild flower plants, creating a series of islands. This was all thousands of feet up in the mountains. It was a little bowl of paradise removed from the rest of the world, elevated up here, tucked away, hidden, and we were the only ones present. We had the whole basin to ourselves. And, although we were clearly exposed in the realm of nature, because we were down in a basin, it felt like were sheltered in this exclusive paradise.

Our destination to set up camp was over by a small collection of pine trees on the far end of the basin, to get there was a bit of a trick, because the streams of water which spread out on the basin floor did so in such a wild manner, and some of these streams were wide and forceful. We had to troubleshoot numerous times, finding our way on and off numerous prairie islands, backtracking when the streams were too wide for crossing.

When we made it to the pine trees, there were mounds of snow protected by the shade. Among them were a few fallen trees creating places to sit down. Next to these were natural pads of pine needles and flat ground to pitch tents. Fittingly so, we set up camp. We placed our tents all relatively close to each other’s, next to the tall pines.  Our camp was near the far end of the basin where a beautiful waterfall, split as it fell, creating two side-by-side waterfalls, which crashed so elegantly down against rocks and into the the network of streams. At the base of the falls were a collection of shards of dark wet rocks that had crumbled down with the falling water.

Despite being out in the wild, I felt sheltered twofold. First, we were down in a basin with the sloping walls around us, placing us in our own little world. Secondly, we were in the fold of the small patch of forest with a strong sense of camp establishment. We had our little tent village, or the bedrooms as I liked to call them. Next to that was a mound of snow, were were had refrigeration- our natural kitchen. I had taken out my water bottles and stuck them in the snow.  Next to that, was a collection of stumps, fallen tree parts, and rock oddities, creating an area to sit down and have a fire- the natural living room, the common area. All of this was hidden and sheltered by the cover of the pines. Never before had nature seemed so accommodating. It was as if it was saying, welcome to my finest. Make yourself at home.

After we set up camp, we went around exploring our immediate surroundings, admiring the waterfalls, collecting wood for a fire. During all of this exploration, Jonathan was inside his tent taking a nap. He was tired from his extra hiking of having backtracked for his missing camera parts. Plus his recent sleep schedule was not his usual he had with the Air Force.

I could hardly believe I was here, that this was real, that this was where we would get to spend the night, a backpackers paradise, a deep cleansing oasis for the soul. And there was more to be seen than the wonders already set before us. Once Jonathan would awake from his nap, we would take an afternoon hike from camp up to the Ice Lakes.

Read the next entry “When Life’s Path is Frozen Over,” here: https://joshthehodge.wordpress.com/2018/03/10/when-lifes-path-is-frozen-over

Read the previous entry “Mesa Verde with My Cousins,” here: