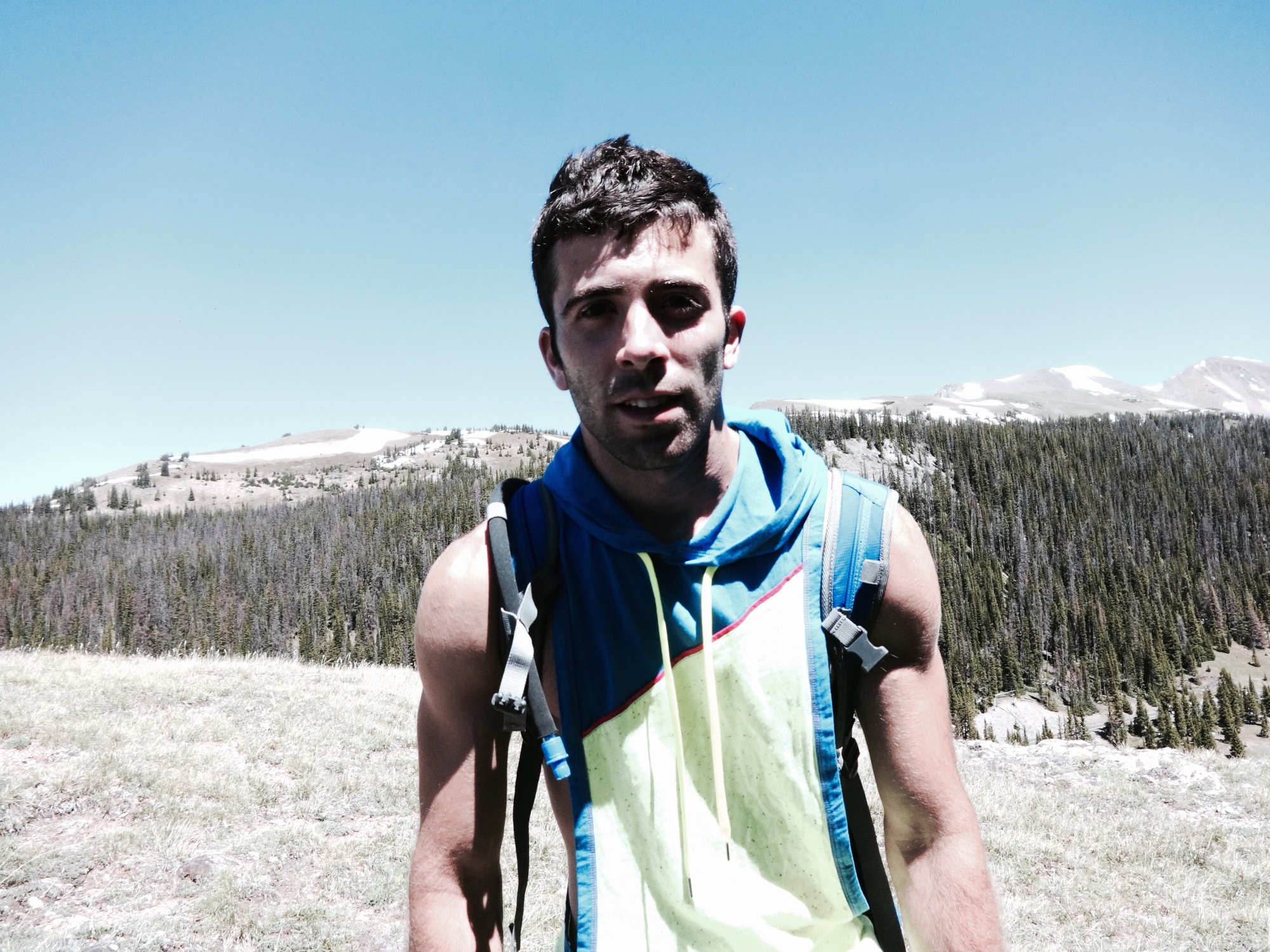 “You’ll never make it,” she warned, returning to the parking lot from her intended hike. Never make it? Do you know who you are talking to? This is Josh Hodge, the one who has found his way out after falling into Bryce Canyon, the one who yesterday climbed a waterfall to Sky Pond. I will make it, I said in my mind. The goal was to hike to the top of Mount Ida, via the Continental Divide over the alpine tundra. I had seen pictures. It looked stunning. “The snow is too deep. You’ll lose the trail,” she continued.

I could have taken her warning to heart, but without a doubt, I knew I had to try for myself. I’ve lived enough life to know I can’t always trust what  people say. I mean, after all, people were saying the world would end with Y2K, Donald Trump would never become president, and Anakin Skywalker would bring balance to the force, yet here we are. And now try and tell me it’s impossible to summit Mount Ida. We’ll just see about that.

So I proceeded all geared up, and only after a few yards in, I began asking myself, now wait a minute…where is the trail? Snow completely covered everything, and here I was, basically at the beginning of the hike, questioning where the trail was. I could only see in retrospect that this would be foreshadowing of the entire experience. It was good, that to begin with, there were footprints to follow. Some hikers had taken a switchback approach, while others made steep shortcuts. Not knowing which was the proper route, I ended up taking both routes. The trail had left the small parking lot and ascended into the pine forest, and that is when the footprints disappeared. The snow was now up to my knees. Every once in a while I would sink down into the snow, but at other times my feet remained on top the frozen snowpack.

If I were a trail, which way would I go? That became my train of thought.  Following a switchback approach no longer seemed feasible, because the incline was too steep and there was no seemingly possible way to hike alongside the mountain. Only going vertical  seemed possible. And so I proceeded, only soon to find out that it might be a little too steep. If my feet would slip and lose grip of the snow, I would plummet down this mountainside, crashing back into the parking lot and maybe banging my head against rocks on the way down. I cautiously maneuvered my way up to a small patch of level ground. To the right there was more incline. In front of me there was even more, and to the left there were rocks and the sound of water rushing under the snow. Since I could hear water but not see it, it made me begin to question what other things were hidden under the snow. What sort of crevices, ravines, water sources and perils were hidden from sight? I trenched toward the rush of water, slowly, carefully placing my steps trying to assure myself the ground was stable under the snow. This was too much. This couldn’t be the way up, I thought. I had to have missed something. I concluded I needed to backtrack. The only problem was that going down, what I had ascended, was very intimidating.

My feet were able to grip their way up, but would obviously slide on their way down. I scanned the scene to feed it into my problem solving matrix. Here was the plan: If I fall, I fall, but I need to strategically plan my fall so that I can stop myself by clinging onto, or falling into,  trees along the way.

I slid, falling down on my behind. And Thump! I hit tree one…and thump! tree two. Phew!  I made it to the level ground. My heart was racing, but a smile spread across my face. That was pretty fun. I was the ball traveling down the ping pong machine.

From another place of level ground, I made a decision to attempt the switchback method, so I snuggled up against the mountain and slowly shimmied my way against it. I was ascending, slowly but surely, leaving the bald landscape and returning back into the forest. The snow became increasingly deeper. I found myself trudging through snow up to my waist. I came to realize this was no switchback route, because there were no turns in direction of incline. My route was all in the same direction. I also came to realize the snow depth had grown much deeper than my waist. My weight sunk into the snow in such a way that the depth was measured by my waist but my feet were still standing on a great measure of compacted snow. This could be ten or twenty feet deep, I began to realize. Each step became a moment of uneasiness. How far would I sink in?  I feared sinking so deep that I would be stuck. I tried clinging onto the grey rock face to my left, but every so often I would lose grip and sink into the snow.

I was completely alone again. No one else had taken this route or made it this far. The parking lot was now far behind and below me. Everyone else had given up much sooner. So should have I, I thought. The prospect of falling deep into the snow, being stuck, and never having anyone find me was horrifying. I had to get out of here. I could see dirt and rock up ahead. I was presently just on top the middle of a giant snow drift.

When I reached ground again, I gave off a sigh of relief. It was like I had just been walking on top of clouds, knowing their consistency was not stable, knowing I could fall through at any moment. What a relief it was to be on solid ground I could stomp ground firmly under my boots. My legs felt wobbly and disoriented, sort of the feeling I get after swimming or riding a bicycle for an extended period of time. I looked ahead through the trees and there was a bald- a section of tundra free from snow, jutting off the side of the mountain. I proceeded to it, knowing here I could get a glimpse of the environment surrounding me and assess the situation.

I caught something colorful with my eyes. Resting against a tree on the edge of the bald was a small canister. This was exciting in two ways. First off, it was a sign that I wasn’t the only human to take this route. Someone else, at some point, had made it up here, so perhaps there was an easier way down. Secondly, It’s a geocache! I thought. Geocaching is an outdoor activity where one follows GPS coordinates to find hidden objects. Often times they are small canisters, containing little trinkets and a log book to sign off on your accomplishment. I had just began geocaching in the spring and had even done a bit with my parents at the beginning of the summer. How cool to accidentally stumble upon a geocache, I thought.

I raced over to the canister. It was made of pottery, and painted all over in bright colors. How fancy, I observed. I opened it, and to my dismay, it contained nothing but dirt. Befuddled, I put the lid back on it and examined the container. Among the colorful design were the white letters “Noah” painted. Under the name were two dates, the latter 1997, revealing to me that these were the ashes of a teenager named Noah. Feeling a bit uncomfortable like I had just desecrated something sacred, I set the canister down. Have his ashed been up here since 1997? No way! Are those ashes inside or just dirt? I didn’t want to think about it. I proceeded to the bald and took a few pictures. The mountainous landscape around me, suggested nothing about what my next move should be. I knew I did not want to attempt continuing up the mountain, but I did not want to attempt going back the way I came, and I had no idea in what direction my next move should be. I returned and sat down next to Noah. “Well…” I told him, “we are lost together,” but the stark contract was that I was alive and he wasn’t. It’s like in a movie when someone gets locked in a creepy dungeon cell, or stuck in a remote cave, and a skeleton sits there, as a warning that no one makes it out alive. That’s the type of feeling I entertained for a moment. However, I knew Noah didn’t die here. He was placed.

Then… What’s that sound? No, it wasn’t Noah. There were other hikers, coming from another direction. “Over here” I called out. I came upon a pair of hikers, also lost. They were two guys, maybe ten years older than myself, who had come up a different route but were now lost. They inquired about how I came up. I pointed, but told them I didn’t suggest it. One of them went over to observe my route and turned around. I told you so. We decided to divide and conquer in attempt to find a route.  We split up, each going in a different direction. None of use were successful and rejoined in the middle. “How about that way?” One guy pointed in a unpromising direction. I followed. I didn’t necessarily trust that these guys would bring us back to the parking lot, but I thought it’s better to be lost with other people, other alive people that is, than just with Noah.

We started descending in a valley on a very shallow covering of snow. While doing so we got to talking about hiking and National Parks and onto the topic of Yosemite and the hike I have not yet done up to the top of Half Dome. On our journey, we came to a barren area of lumps of wispy grass frozen and covered over with snow. Here we came upon another hiker. He became the leader of the pack, assuring us a way back to the parking lot. We all proceeded as a ragtag pack of hikers, who all got lost, who all got defeated by Mount Ida, but who were so appreciative of finding each other.

I sat back down in my car, relieved to no longer be lost, feeling the humbling effect of defeat and replaying the words of the sassy girl, “you’ll never make it.” She was right. I failed. However, what a story! Getting lost, finding Noah, teaming up as a pack of hikers to find our way out. It was a good experience. I was satisfied. Sometimes I feel like I have the  instinct to prove others wrong, and sometimes those instances of attempted proof are not always successful but are instead met with failure. But it’s in the failure that I learn humility, I discover my limits, and come away with stories to tell. So, tell me again I can’t do something. Watch me succeed or watch me fail. Either way, I come out better off.