My heart was racing, What do I do now?  I looked down. This was the third time on my adventure I found myself in the dilemma of being in a high-up location, looking below me uneasily, wondering how to get back down. The big difference was this time there was an audience of spectators watching me. I had to make a decision quick. I did not want anyone coming to my rescue. This was embarrassing. I found myself crouched down low, legs extending, and finger-tips trying to clench the rough steep sand paper terrain.

I was at the base of Delicate Arch- the most iconic geological feature of Utah. It wasn’t enough for me to see it and get my picture taken by it. I wanted to explore around it. As I went to hug the arch legs and shimmy my way around its base, I lost footing, gravity cleverly pulled me. I couldn’t stay standing any longer, and as my body and limbs were spread out across the terrain like a spider, I was afraid that any slight movement might send me tumbling into the desert bowl below me. The bowl just below the arch appeared as if years of weather and wind carved it out. Sandstone swirled around to form the bowl and reached up to connect to the towering Delicate Arch, where I was pulling my Spiderman moves, trying to hang on, hoping friction would be on my side.

I realized there was no going back up, because I would have to turn my body around, and there was no place to do so. I would plummet. So I had to proceed forward. I had to descend into the bowl. The only problem was that it was a long and steep way down, and it looked near impossible to descent without fall. If there were to be a fall it would be detrimental, for all of the ground was rock, and there was absolutely nothing to grab onto to break the fall. I would be sent rolling uncontrollably on the sandstone.

With wobbly legs and a queasy fear of the heights, I brought myself back onto two feet and immediately began my descent. I was running, trying to pair myself with gravity and avail a complete fall. My feet stopped forcefully on the sandstone, as I speedily propelled down into the bowl. My focus was staying on my feet and not falling out of control. With each passing second, as my feet stomped their way down into the bowl, I wasn’t sure if I would remain standing.To quote famous cowboy, Woody, you might say I was “falling with style.”  Despite my clumsiness, I made it! I was in the rock bowl looking up at Delicate Arch, relieved, thankful to be unharmed, and gaining a view probably not too many people get to see of Delicate Arch.

When I first set out to explore around Delicate Arch, I thought it was normal, but now judging the terrain, I knew this was not something people do. Furthermore, it was probably off limits. The last thing I needed was to get in trouble by the National Park Service, an organization I volunteer with and so admire. I needed to get back on trail and blend in. I felt like an offender of the landscape. I was thoroughly embarrassed, knowing that my whole shenanigan was witnessed by dozens of tourists. Finding the trail involved hiking down into another bowl and climbing a much shorter distance up and out onto the trail. Once back on the trail, I felt like I needed to hike back to Delicate Arch and bid it farewell.

Thus was the extend of my main adventure in Arches National Park. The trail to Delicate Arch was one and a half miles and decently strenuous, working the calves and thighs as it is mostly an ascend on bare rock face. Near the trailhead, there is a little off shoot trail that leads by some petroglyphs. I took it in on the way back, and met a couple from Cincinnati, Ohio. I overheard them talking about the horned looking monster in the petroglyph and how they noticed the same creature in the petroglyphs in Capitol Reef. “Aliens. They have to be aliens,” the wife informed. Since I had just been to Capitol Reef, I found it would be interesting to engage them in conversation. We talked petroglyphs and the nature of our trips, and they said they applauded me for venturing out on such a trip alone. In addition to this main hike, I also pulled over and took the very quick hikes to Double Arch and Balanced Rock. At Double Arch I was recruited by a small group of Chinese tourist to take their picture. I was asked through a series of gestures, since we couldn’t verbally communicate. Pointing at my camera and then myself, I was able to get them to return the favor. This park was very busy and full of people from all over. I had noticed many tourists from China and Germany. Parking was very tricky, but I was lucky.

Prior to arriving at the park, as I was approaching, I had tuned into an AM radio station designated for the park, which was warning tourists that the park was expecting a large number of visitors and not to stop on the highway if the entrance to the park was backed up. I did not have this problem, as I had arrived fairly early in the morning. Once in the park boundary, I ascended a large switchback road to higher ground where I stopped at the visitor center. I watched the park film and bought my customary souvenirs. It was a very nice and modern visitor center, and the park film spoke a lot about the summer storms and how Delicate Arch was just one summer storm away from being broken and knocked down. It made me speculate that perhaps in my lifetime Delicate Arch would be no more, just like the fate of the Old Man on the Mountain in New Hampshire, whom I visited as a child but who no longer exists.

Also in the visitor center, I decided to take care of my bookless dilemma. I bought a 448 page book called The American West, a general history of the region, and a book about coyotes, geared towards kids, but it had a lot of great coyote picture and facts that informed my purchase. Throughout my travels, coyotes have come to be my favorite animal, and I wanted to learn more about them. Not being a bearer of a smartphone, I relied on old-fashion methods to gain my knowledge while traveling.

Just outside the visitor center there were two water fill stations- spickets attached to pillars. Hikers gathered around and lined up to fill up their water bottles and hydration packs. There was definitely a spirit of adventure in the air, being surrounded by people with hydration packs and bottles of all shapes and sizes, all gearing up for their own explorations, I figured I should fill up on water as well, so I brought over my nalgene bottles and hydration packs and became fully stocked up on water.

After Arches, I headed into Moab, the nearest town, and epicenter for outdoor adventure in Utah. This town is a major hub for the outdoor enthusiast. Everything is geared toward, and accommodating for, the adventurer. The town itself is very small. According to a 2016 census the population was 5,242,  but the number of outdoor adventurers visiting is great and probably outnumbers the people living there. Although tourists were coming from all over the world to experience the wonders of Utah, bringing their own culture and customs, adventure and discovery bound us together, and because of that it was as if we all spoke a common language. 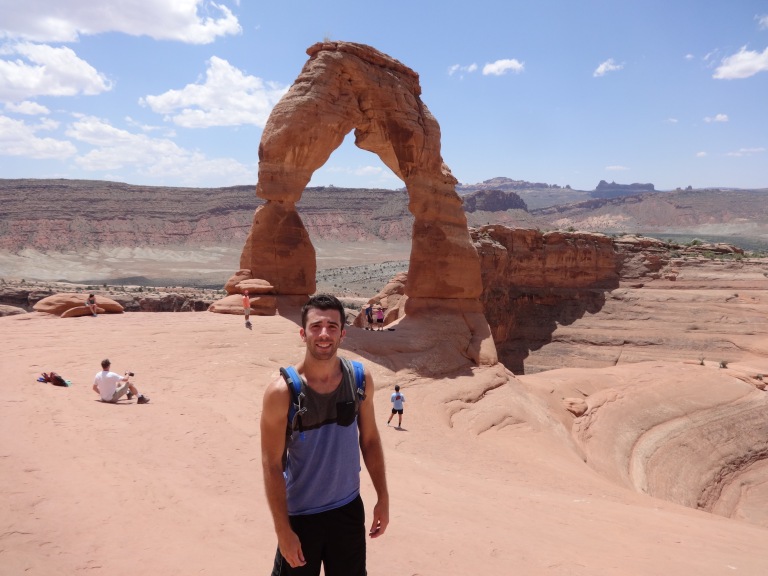 Read the previous entry “Coming Back to Life,” here: https://joshthehodge.wordpress.com/2017/11/06/coming-back-to-life/

Read the next entry “Seizing the Moment,” here: https://joshthehodge.wordpress.com/2017/11/12/seizing-the-moment/