Most of my memory of Bryce Canyon is painted in warm shades of orange and dressed in a whimsical fashion, with forest animals trampling around and everything being just about right. Bryce Canyon is a lasting deep breathe of fresh air that will remain vividly captured in my memory. No other park comes close to capturing its unique combination of forest, desert, and hoodoo wonderland. I will long for it’s hot dry sunny days and cool refreshing star-filled nights, where the air feels hollow and easy to breath, perfectly accommodating the camping visitor.

On this second day in Bryce Canyon, I began with a hike.  Dom did not join because he needed to seek internet and complete homework for a class he was taking- a very unfortunate circumstance I must say. I began my hike on the Queen’s Garden Trail and continued on the Navajo Loop. The trails were narrow and crowded. Many people were enjoying the wonders of Bryce Canyon. At a few turns in the trail, I had to wait on people in front of me. The trails wound around many hoodoos, shimmied through slot canyons, and passed under natural arches, all in manageable 2.7 mile hike.

I’m not sure if it’s the names of the trails such as “Queen’s Garden” and “Fairyland Loop” that influence my perception, but Bryce Canyon does remind me in a roundabout way of Alice in Wonderland, in part because of such colorful geological oddities and it’s trails meandering and twisting around in such a whimsical fashion to arrive at a singular spot. A sense of wondrous suspense accompanied me on these trails, for I never knew what was around each bend and twist in the trail, what seemingly impossible geological feature would stand before me, or what colors would so strikingly comprise the landscape.

During my morning hike, I came to a bend in the trail where a squirrel stood upright, poised on two feet, as if waiting to draw the attention from the hikers. It looked different than the typical squirrels we have in the Midwest. I later learned that it was a golden-mantled ground squirrel. The way it was poised looked as if it was accustomed to posing for pictures. It wasn’t the least bit concerned by my proximity. It didn’t budge as I knelt down to take it’s picture. It was just the sort of adorable woodland creature one would expect to find in such a whimsical place. Squirrel pictures always run the risk of being commonplace but this turned out to be one of my most memorable photos from this park. It is important to note, that approaching wild squirrels is not advisable, and if done, should be done with caution. Some squirrels in the National Parks of the West can become aggressive. 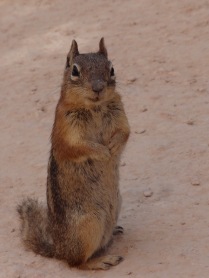 I recall the prior summer, when I was in Zion, another National Park not too far away, I was short on time and was in a hurry to get to the trailhead of the famous Narrows. There was heavy slow-moving traffic on the pathway because a group of Asian tourists were enthralled at the sight of squirrels and were all trying to take pictures of the creatures. I was annoyed. It’s just a squirrel, I thought. But when you are more carefree and have the time, I now understand the pleasure in stopping, not to smell the roses, but to admire the squirrels.

After the photoshoot with the squirrel, I continued on my hike, passing large

thin hoodoos towering above as if enormous fins to guide the planet through the galaxy. As the canyon narrowed to almost a slot canyon, a pine tree strikingly stood grounded, reaching for the sky, a location where many travelers have taken photos.

The last leg of the hike included dozens of short switchbacks out of the canyon. Despite being man-made, these switchbacks are one of the more iconic features of the park. I’d seen them before from various photographers, and they appeared in Greg MacGillivray’s film, National Parks Adventure. As I was ascending, I captured a scene that will stick with me forever. An elderly couple most likely in their eighties were ascending the dozens of switchbacks. They walked extremely slow, just shy of shuffling, slowly but determined. At the curve of a switchback, the husband, reached out his hand to help his wife ascend the steep incline. I simply watched in amazement. Their actions spoke a lot. Though moving extremely slow, they didn’t let their age nor weakness stop them from adventure. The husband reaching out to help his nearly crippled wife ascend and round the curve, was precious, speaking of the love and dedication he has for her. I’m certain they had no awareness of my presence and observations. It goes to show that the simplest and most ordinary of your actions can have a lasting impression on others.

I wondered how many adventures this couple had gone on before. Were they seasoned park explorers, just continuing to do what they love and not letting old age stop them, or was this because they had not gotten out when they were younger, so now they decided to see what they could? I prefer to entertain the first and imagine this couple held tons of adventure stories and a wealth of experience, and nothing would stop them from having more adventures.

Back on the high ground, I got in my car and decided to drive the length of the park and get a complete feel for the place. The park was very simple with one main road that traverses the expanse of the canyon rim and numerous spots one can pull over to take in beautiful vistas of the canyon expanse. The road climbs up into brisker, more densely wooded areas and extends all the way to Yovimpa Point, which during this visit was closed due to repair.

After my self guided tour, I drove back to the general store to attempt to take a shower again. It was a success. However, I forgot a towel, but it wasn’t much of a problem. The climate was so dry, that I quickly dried off. There is nothing more refreshing than stepping out of the shower into a hot but dry climate. The air feels amazing engulfing the skin, and I feel totally refreshed. After my shower I then bought myself another piece of pizza and a Greek yogurt from the general store. After enjoying these on the porch, I drove to the Bryce Canyon Lodge, picked up a couple postcards and found a quiet nook near the lobby. I was surprised to find Dom there, working on his homework. I told him about the trails I hiked and the beautiful drive and then sat down to write my postcards. I wrote on a panoramic postcard to my parents and then wrote to two other postcard buddies.

When both Dom and I came to completion of our tasks, I had convinced Dom to go on the park drive. I accompanied him, having enjoyed it so much the first time. I’m glad I did go a second time and was able to share the experience with Dom. Dom had an SUV he had borrowed from him mom, and he had the thing full of gear for a summer of adventure. His plan was similar to mine, to road trip and explore the great American West. His trip was less planned than mine. I had campsites reserved for every night, and even had Plan As and Plan Bs for part of my trip. Dom was more carefree, willing to travel wherever the winds swept him or the roads led him. One notable thing he had in the SUV was a drone. Dom is really into photography and the latest in technology and was hoping to catch some great drone pictures along the way. Drone use, however, is prohibited in most National Parks, but he did tell me how he sent it in flight at Horseshoe Bend- a few days before. When it was out above the river in the canyon, it ran out of battery power and started plummeting towards the Rio Grande. Moments before impact, it had a spike of energy and was able to be flown back to safety. What a scare!

As I was ascending the canyon rim a second time with Dom, I really took in the stark contrast between the two sides of the road. One side of the road boasted the Bryce Canyon and all it’s golden orange display. The other side was all thick pines, dark green, no orange, looking like the forest of the northwest.

Along the drive, Dom and I got out of the SUV at numerous viewpoints, but eventually decided we wanted to race the clock and get back to the main section of the park to Sunset Point before sunset. We failed. We arrived at Sunset Point just moments late. Both of us wanted to arrive there at sunset for different reasons. Dom wanted to take pictures, and I wanted to be there because I read in the park newsletter how Stephen Mather, the first director of the National Park Service, sat at this point admiring the canyon at sunset and here decided he wanted to protect this as a National Park. I wanted to put myself in his perspective and gaze upon the canyon at sunset, looking at it with the same value and admiration Mather did.

Despite having missed the sunset, the view was still gorgeous, and the canyon was painted deep orange and dark purples. Opposite the canyon the sky was bright pink with the silhouettes of tall pines on displayed. Dom started talking to another photographer- all in technological terms, beyond my ammature understanding. I wandered off and lost Dom, but eventually we were reunited at the SUV, and headed back to camp.

At camp I roasted some slices of ham lunch meat over the fire and cooked a can of corn at the fire’s edge.  Dom was hoping all during the day that he would get to see a Utah Prairie Dog, an endangered species only present in Bryce Canyon out of all the National Parks. Despite his desire, he had no luck. The following morning I had success, but the creatures were easily startled and too fast to be captured by photograph.

Sitting around the campfire this second night, was our last night in Bryce Canyon National Park. This National Park visit was quintessential, beautiful, challenging, calming, and now I have stored up in my mind a previously unimaginable landscape to explore again in recollection and wonder.

Check back as I move onward in my adventure to Capitol Reef National Park!