The Africanized Honey Bees a.k.a. “killer bees” are found throughout Saguaro National Park. What makes them so dangerous is that even if you offend one bee, the insect releases a pheromone that attracts the rest of the colony in a swarm to assault the perpetrator, or so I’ve read. And if you end up finding yourself too close to a hive in the bees sacred “safe space,” you might as well consider yourself dead.

These bees are no joke. They are a cross-breed that were mixed to increase honey production in Brazil but later made their way into  south Texas and now Southern Arizona. I was reading all about the Africanized Honey Bee after seeing the safety warning on the Saguaro National Park website.

Needless to say, I had no encounters with bees at Saguaro National Park. Everything about my time in the park was pleasant. It started at the Red Hills Visitor Center at the Saguaro West Tucson Mountain District. Something a bit peculiar about this National Park is that there are two distinct parts of the park separated by the city of Tucson.

When I got out of my car at the visitor center I noticed the National Park centennial flag flying high, a beautiful vista of Saguaro cacti all around me, and the mountains resting in the distance. Inside a park ranger, or perhaps just a visitor center employee, told me hiking is not recommended in the heat, but that I could drive the Bajada Scenic Loop. I appreciated the advice, but I knew she didn’t know that last summer I went hiking and camping in Death Valley and the Mohave Desert. I can handle the heat. While I had her attention I asked for the best directions to get to my campground at Catalina State Park. She was very friendly and helpful, giving me area maps and detailed directions. I have only ever had very positive experiences with everyone who works for the National Park Service. As tradition, before leaving the visitor center, I purchased a pin. I purchase a pin at every National Park I visit. It’s my one cost effective souvenir.

Desert Discovery Nature Trail, which is a short interpretive half-mile loop around various cacti. There were some impressive Saguaros to observe. I learned that the inside of the Saguaro cactus can be up to 20 degrees cooler than the air outside. Therefore birds, kangaroo rats, and even foxes find shelter within the cactus. I would have never known this and find it fascinating that there is much more to the cactus than what meets the eye. Walking around the trail loop was intriguing as simple and short as it was. I had been in deserts before but not a desert with so much cacti and plants. The ground itself was very barren and crusty but all over and placed, in such an impressive array, were all sort of cacti and rocks. It almost looked like it was designed purposely despite it being wild. Also looking up at the Saguaro evoked a feeling similar to that of looking upon the mighty Sequoia- both are iconic, stately, and extremely resilient plants. While the Sequoia is largely fire resistant, the Saguaro is heat and sun resistant, enduring extreme heat and sunlight. These plants just give off an inspiring essence of strength.

Here on the nature trail I took quite a few photos, not only of cacti and the mountains over to one side, but admittedly of myself. I wanted to get a picture of myself with the Saguaro. I have a walking stick that also doubles as a monopod for my camera. In many terrains it’s easy to shove the stick into the ground and set the timer on my camera. Here the desert floor was so hard I could not get my stick to stand upright, so taking photos was a bit more challenging.

There were many small lizards scurrying about this trail too. I did manage to get a few good lizard pictures.

After my peaceful trail walk, I embarked on the one-way Bajada Scenic Loop in my car. Since it is one-way, it was a commitment. There was no turning around- although at times I was concerned it was a little too rough on the car. But we managed without any problem at all. I pulled over at a few times to take pictures and took a short hike up Signal Hill to check out some petroglyphs- the first of many petroglyphs I would see on this trip.

I knew my time in Saguaro National Park would be brief. I wasn’t planning extensive hikes. I wasn’t planning to stay long. I mean after all- killer bees! But in all sincerity, I knew it was a small National Park. So, after a couple hours, I was done. That was it. I left just thinking, that it was very pleasant, and something new. I had never experienced this type of desert landscape and had never seen the Saguaro in its natural habitat. 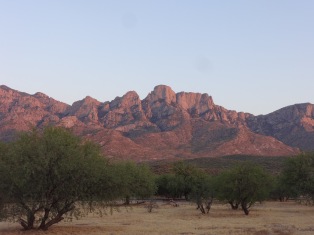 I departed Saguaro National Park and made my way around the outskirts of Tucson to Catalina State Park where I had reserved a campsite in advance. When I made my reservation I did so online rather blindly. When I arrived I was surprised to find that my reserved campsite was probably the most scenic one in the whole place. From where I pitched my tent, I had an amazing view of the Catalina Mountains, which were golden with the warm glow of late evening sun resting upon them. There were a number of holes in the ground where rather large ants and beetles would run in and out of. I tried setting up my tent in the least obtrusive area. While I was setting up my tent, I saw a coyote trotting around just next to my campsite with the mountains behind him.

This campground was not remote. It was close to the entrance of the park and had newly laid blacktop all throughout. It was well developed, with trash receptacles and bathrooms with showers. However, I only saw one other campsite occupied, So I was pretty much alone. it was very peaceful.

I pitched my Kelty Salida 2, my new tent, one of two tents I brought on this trip. Kelty is very airy and intended for hot desert environments, while my other tent, more sturdy and insulated, which I call “True Blue,” is for colder and wetter environments.

After I set up camp I drove across the street from the state park to none other than Wal-Mart- very convenient. Now, camping in a park across the street from a Wal-Mart in say Kentucky sounds just very sketchy. But this Wal-Mart had to be the nicest fanciest Wal-Mart I have ever been to. The parking lot was immaculate with landscaped islands and classical music piped throughout. It did seem very fitting though, because surrounding this area were private, planned communities with very fancy and expensive desert oases.

I bought a sandwich, Greek yogurt, and an apple, which I later ate in my car for dinner, as well as food for the next couple days. I also had to buy lot of gear for the month ahead. Since I arrived to the West by plane, I could only bring so much, so I had to buy a sleeping bag, pillow, matches, batteries, and food storage containers. I also bough a $8 camping air mattress for those nights I would really need a good sleep. 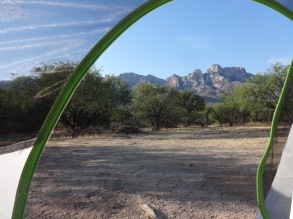 This night I slept in my tent on the ground in just my sleeping bag. I brought my road atlas and driving GPS with me into the tent to work on my route for the following day. I wasn’t looking at the atlas very long before I fell asleep. I slept well, except remembering waking up a few times cold. I wasn’t expecting it to get cold at night. In the morning I woke up to a chorus of coyotes. I took advantage of the shower at the campground, knowing my next opportunity for a shower would be a number of days away, a few National Parks later, and on the other side of the Navajo Nation.

I got in my car ready to slide up the east side of Arizona to Petrified Forest National Park-or in my mind, planet Lothal from Star Wars. Here I would secure my first wilderness permit and backpack into the wilderness to spend the night.

Check back tomorrow for my account of the wilderness on planet Lothal.